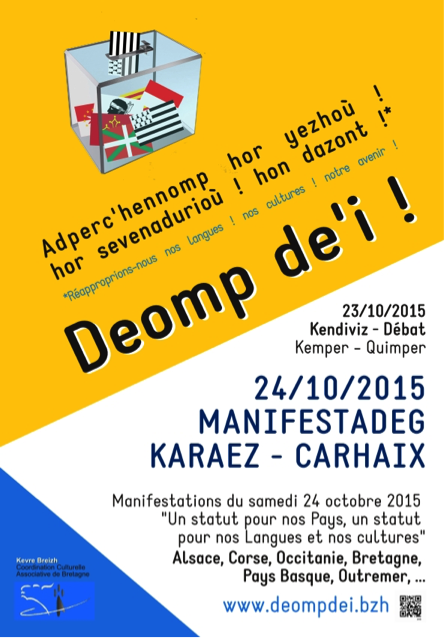 I have recently published a book about new speakers of three minority languages: Breton, Yiddish and Lemko. One of my main aims was to demonstrate that certain aspects of “newspeakerness” seem to be common across a number of different situations of language minoritization.

A reaction I was not expecting to the publication of the book was contestation over its title.

On the surface, the appearance of new speakers of minority languages would seem to indicate that a decrease in the absolute numbers of speakers of these languages was being halted or at least slowed down.

However, the inclusion of “Breton” in the title of the book gave rise to a number of comments on internet fora to the effect that the language is not, in fact, being revitalized (a statement that might raise an eyebrow among those thousands of people engaged in learning, teaching and providing educational and cultural activities in Brittany and further afield at the present time).

Breton is not being revitalized, so the argument goes, because the linguistic practices of new speakers is not “authentic” enough.

A recent cultural manifestation in Carhaix, advertised in this poster, attracted the comment:

(I wouldn’t say this is reclaiming Breton, but replacing it by something else that is neither fish nor fowl. In the sentence, ‘adperc'hennomp hor yezhoù, hor sevenadurioù, hon dazont’ [let’s reclaim our languages, our cultures, our future], what is exactly Breton in it, apart from ‘hor’ and ‘hon’ [our]?)

In the case of Breton, as in many minority languages, new speakers can experience the delegitimization of their status as “authentic” speakers, not through their actual linguistic practices (another commentator pointed out that, “Pour moi, ‘hadperc’hennañ’ n’est pas si mal – ce n’est pas courant, mais c’est parfaitement compréhensible pour tout bretonnant du cru” [For me, ‘hadperc’hennañ’ isn’t so bad – it may be unusual, but it’s perfectly understandable for the ‘vintage’ Breton speaker]), but because an ideology of “authentic language” can colour perceptions.

Interestingly, the comments cited here were both made by Breton speakers who are new speakers themselves.

We can thus observe a hierarchization of new speakerhood – some new speakers consider themselves better speakers than other new speakers; Gilles Quentel and I have called these speakers in a Breton context “native authenticists” (Hornsby and Quentel 2013: 78) who tend to oppose (sometimes quite aggressively) what is seen as a “neo-Breton” elite.

This recalls O’Rourke’s and Walsh’s findings in Ireland where new speakers engage in ‘language policing’ with each other (O’Rourke and Walsh 2015: 74).

O'Rourke, B. & Walsh, J. 2015. New speakers of Irish: shifting boundaries across time and space. International Journal of the Sociology of Language 231, 63–83.

Michael Hornsby works in the Department of Celtic languages and literatures in the Faculty of English at Adam Mickiewicz University in Poznań, Poland. His PhD (University of Southampton, 2009) examined the concept of new speakers of Breton and since then he has worked on comparative studies of new speakers of other minority languages, such as Yiddish and Lemko.