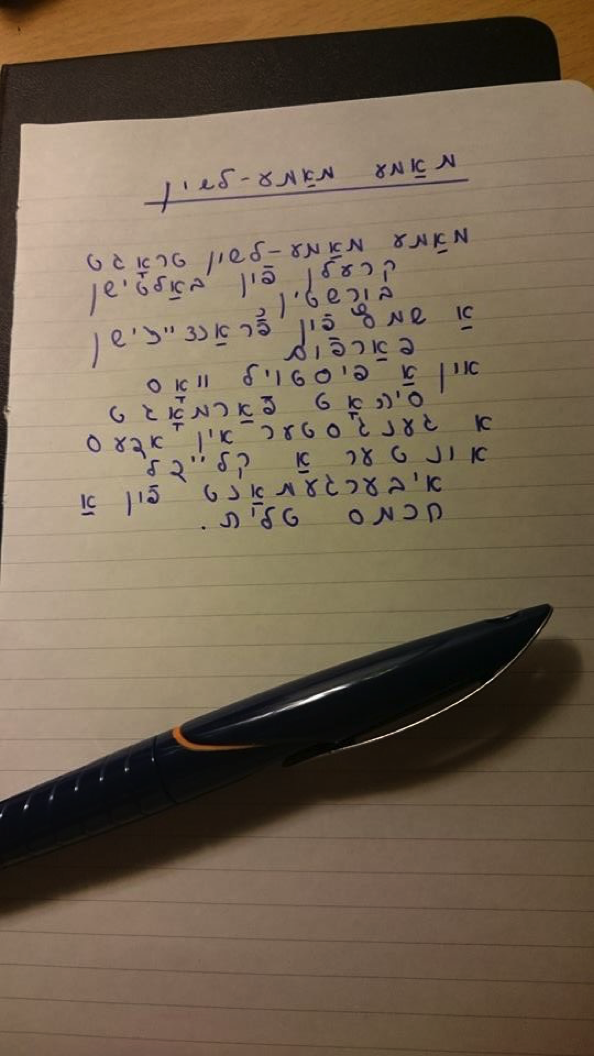 As a member of Work Group 1 of the COST New Speaker network, I am particularly interested in the maintenance of (and expansion in) the use of minority languages in connection with those current and potential speakers who have acquired, or who are in the process of acquiring, a lesser-used language by means other than through intergenerational transmission.

Having already carried out some investigations among new speakers of Breton in the past, I was able to expand my range of examples with reference to another minority language, Yiddish, thanks to a short term scientific mission (STSM) and engage with what might be termed a community of practice (CofP) of new speakers of Yiddish in Edinburgh, Scotland.

Working closely with Bernie O’Rourke at Heriot-Watt University, Edinburgh, who is also the chair of this COST New Speaker network, I was able to compare the linguistic attitudes and practices of new speakers of Yiddish in the Scottish capital with my own previous work, and also engage in discussion with Bernie on the particularities of the Galician situation.

One point of similarity we quickly discovered was the contestation around those linguistic varieties deemed 'minority' which are closely related to a more widely spoken, more prestigious variety, e.g. Galician and Castilian, Yiddish and 'High German'.

Such contestation can be manifested in certain linguistic practices where speakers attempt to avoid identical lexical items in both varieties and distance themselves from the prestigious variety (the Ausbau or ‘building away from’ model of language planning) or, the converse, where some speakers are “accused” of mixed language practices, in that their speech demonstrates increasing influence from the majority language (for example, accent or syntax), to the point where new speakers of Galician, for example, can be accused of speaking “bad” or “corrupt” Spanish.

The same holds true for some younger speakers of Lemko (an eastern Slavic language in Poland I have also worked on), whose linguistic output can sound like “bad” Polish.

This is an issue Bernie and I wish to take forward in some comparative work in the future.

Some interesting data were produced from this particular piece of fieldwork – in particular, the ways in which new speakers of Yiddish deal with notions of “authentic language” and how, in some cases, they have to reconcile their childhood experiences of overhearing snatches of conversations in Polish, Lithuanian or Ukrainian Yiddish with their current experiences of engaging with a more standardized form of the language.

Working with these new speakers of Yiddish, and subsequent discussion of the data with Bernie O’Rourke, was a very illuminating and enriching experience, the analysis of which is currently under review as a chapter in a monograph I recently completed on the theme of new speakers and minority languages, and which should appear in print towards the end of this year.

Michael Hornsby works in the Department of Celtic languages and literatures in the Faculty of English at Adam Mickiewicz University in Poznań, Poland. His PhD (University of Southampton, 2009) examined the concept of new speakers of Breton and since then he has worked on comparative studies of new speakers of other minority languages, such as Yiddish and Lemko.